Turtles, rare plants, an isolated island – what more could you want in a holiday? Lord Howe Island (LHI) boasts to be a hidden paradise and in September 2018 we got the chance to visit on the “Protecting Paradise Travel Package 2018.” For more on the island and its eradication program check out this post.

We arrived on the island not long after 9:30am and managed to fit in a quick nap at our Ocean View Apartment, named so as just down the driveway we had the view of the ocean. Our first stop, Ned’s Beach. We took a shortcut behind the apartments through the farms, saying “hi” to the local cows and made our way to the beach. The beach was known for being an amazing snorkelling spot, and for those who did not want to take a dip, they can feed the fishes that are waiting in the calm waters. After dispensing some fish food from the machine that resembled gumball machines, my friends and I waded into the water about knee deep and were greeted by fish. It was a great experience and the friendly fish were getting close enough that their bodies would occasionally brush up against our feet. Here’s a video of the fish we fed.

The next day we rode our bikes to the LHI Museum. The museum recounts how the island was formed by volcanic activity, its settlement history, the number of ship and plane wrecks around the island. It also had displays on the flora and fauna, including the Lord Howe Island Stick Insect, Dryococelus australis. The LHI stick insect is the rarest insect in the world and used to inhabit the island but due to the rats, they were listed as extinct. The stick insect was then rediscovered by accident on Balls Pyramid, a volcanic outcrop 23 km from the LHI in 2001. Since the rediscovery of the insect, Melbourne Zoo has introduced a captive breeding program to save the species in the hopes that with enough insects, they can be reintroduced to LHI once rats have been eradicated.

After the museum trip, we headed down the road to meet the biosecurity dogs of LHI. Being an island with so many endemic species and with a history of extinctions due to pest species, the island takes biosecurity extremely seriously. When the fortnightly vessel docks on the island, permanent rodent detector/biosecurity dogs are used to sniff out anything suspicious, particularly rats. As part of the Rodent Eradication Program, these dogs will sporadically conduct target searches in random and high-risk areas of the island.

Sebbi, one of the biosecurity dogs (Image: Naomi Huynh)

After the meet and greet, my friends and I rode our bikes to the other side of the island to the bottom of the Goathouse. The Goathouse hike is 4 km long and the cave rises 400m above sea level. It is considered to be a warm-up walk for those wanting to climb Mt Gower (which is LHI’s tallest peak and is rated as one of Australia’s best day walks by magazines and travel blogs). Locals say that if you can hike the Goathouse walk in about an hour, you should be able to do the Mt Gower walk as the difficulty is compared to climbing Goathouse two and a half times. The walk started with a boot scrubbing bay. These bays are placed at the beginning of major hikes so that it helps prevent the spread of Phytophthora, Myrtle Rust and other plant pathogens that have been found on mainland Australia and has the potential to significantly impact the biodiversity if it arrives onto LHI.

The beginning of the hike started of boarded and with small bridges but as we climbed higher, the walk became steeper.

While on the walk, my friends and I kept a lookout for any banded currawongs and fungi that we came across to photograph and record for the museum. I mean a bunch of scientists going out hiking, of course, they will contribute to science however they can. Here are some of the things we saw on our walk. 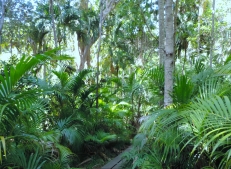 The beginning of the hikes started out with a boardwalk (Image: Naomi Huynh)

Howe Woodhen, Galliralus sylvestris, one of the endemic species on LHI that listed as endangered due to human hunting since settlement and pest animals preying on them (Image: Naomi Huynh)

After climbing up rocks and holding onto ropes, we have made it to the top of Goathouse and the view was amazing. I would highly recommend this hike. Also, if you look into the caves around summer time, you will be able to spot some Red-tailed Tropicbirds, Phaethon rubricauda, nesting in the holes.

The view of LHI from the Goathouse Cave (Image: Naomi Huynh)

The next day started out with a two-hour glass bottom boat tour at Lagoon Beach which included 2 stops for snorkelling at Erscott’s Hole and Favorite Shipwreck (yes it’s spelt like that. It was an American tuna boat). LHI has the world’s southernmost barrier coral reef. The reason being that the East Australian Current brings warm water needed for coral growth and fish survival down from the tropics. On the tour, we could see corals with colours ranging from browns to blues to fluoro yellow. It was unlike any sort of coral I have seen before. We saw plenty of animals including colourful wrasses, butterflyfishes, and even a turtle. Despite the swell and 17-degree water, I went snorkelling. How often will I be going to LHI? Not often! So I took the opportunity. Here is a video of some of the fish I saw while snorkelling at Erscott’s Hole and Favorite Shipwreck.

That night, we joined Ian Hutton, the island’s naturalist and photographer on a spotlighting beetle survey. The purpose of the survey was to count the diversity and abundance of beetles on a small section of the island and collect any undescribed specimens to be sent to the Australian Museum. We were joined by other travellers which were a great way to meet other people. Plus the more people, the better the survey/search. Not only did we see beetles that night but also geckos, spiders, lacewings, snails, semi-slugs, planthoppers.

Unknown species but when scared, the beetle would excrete a smell that reminds me of being in the hospital (Image: Naomi Huynh)

The following day, our group split up. One person was going to take on the Mount Gower hike. The hike is treacherous, and you must go with a guide. The peak rises 876m from sea level and takes 8.5 hrs for a 14km return. The mountain is unique in that the plateau contains a critically endangered cloud/mist forest containing a variety of endemic plant species including the Big Mountain Palm (Hedyscepe canterburyana) and Little Mountain Palm (Lepidorrhachis mooreana). Based on my friend’s feedback it was definitely a hike he would recommend doing if given the chance.

The other group (which was me because I did not think I could have climbed Mount Gower) spent the morning snorkelling at Old Settlement Beach. The beach has been known to be the best spot to swim with turtles as they feed on the seagrass. It is a calm snorkelling spot and with the picturesque Mount Lidgbird and Mount Gower in the background. Here is a snorkelling video I filmed.

The beach also has BBQ facilities, and you could even buy BBQ hampers from restaurants around the island, which they deliver to your chosen beach.

By afternoon, my group headed off to find the Herring Pools. These are secluded natural pools that have formed from weathering and erosion of volcanic rock. You cannot find them on a map. To get there, you need to head out to Old Gulch and walk along the right side of the coral-filled beach over the rocks. Just as you reach the point, you will have arrived at the Herring Pools.

These pools are perfectly safe to jump and swim in. My friends and I just chose not to because it was a bit nippy.

You will also notice long “lines” running through the rocks. They are known as dykes. This is where volcanic matter has intruded through the original basalt. Because this is from magma that has found its way through cracks or spaces, it solidifies at a different rate as the surrounding rock. As a result, it appears as a different colour and crystal structure.

Can you spot the dyke? (Image: Naomi Huynh)

On our last full day on the island, my friends and I rented out some kayaks and set out to paddle them to Blackburn Island.

Blackburn Island is home to Wedge-tailed Shearwaters, Ardeena pacifica. These birds are often seen from the mainland circling the island and landing in the afternoon. Because these birds have no natural predators, they don’t see people as threats. They often flew into my friends and me while landing. Wedge-tailed Shearwaters have nests either in burrows or the surface of the ground.

Wedge-tailed Shearwaters are vocal birds especially if you are intruding in their territory, as my friends and I had been doing on the island. It is easier to hear these birds than see them.

After walking to the top of the island and reaching the windsock (you can see in the island photo) we were greeted by uninterrupted views of the west side of LHI. This was the perfect spot for us to have a picnic.

Following our picnic, we climbed back down from the top of the island and kayaked our way back to the main island. The adventure continued as we made our way to the other side of the island to Ned’s Beach. With the weather being warmer that day, we decided to snorkel there for the rest of the afternoon. Here is a video of what we saw snorkelling at Ned’s Beach.

This was our last day on the island and we had only half a day to mill around before our flight. We rode our bikes to Middle Beach. It was a tough bike ride as the beach was over a steep hill. The beach is used primarily for shelling and fishing, but even having just a look was good enough. The surf was a bit rough and it was high tide. During low tide, you could walk along the entire beach and have more space to lie down and relax.

After exploring the beach, we went back to the town for some last-minute souvenirs. By noon, it was time to board our flight back to Sydney, ending our trip to Lord Howe Island.

I would highly recommend LHI as a holiday destination. There was so much to do from hiking multiple tracks, to snorkelling on the colourful reefs, to sitting by the beach birdwatching. There is something for everyone. The unique geology, flora and fauna is something that is unforgettable. David Attenborough even did a segment on the Providence Petrel, Pterodroma solandri in his “Life of Birds” documentary.

Thank you to the friends that came with me on the trip. It definitely made the trip more entertaining.

The group of friends that I went with. From the left: Karen, Christine, Bao, Neil and Me (Image: Naomi Huynh)

Typically, it is cheaper to get a holiday package that includes airfare and accommodation. My friends and I went with Oxley Travel.

As with many small islands, food and eating out can get expensive. On LHI, a freight boat arrives every two weeks so if something is sold out at the grocer, it may not be back in stock for two weeks. If you want to travel on a food budget, you can bring groceries in your luggage to cook.

You can go to the island at any time of the year. Sea breezes keep the summers from being too hot while winters are pretty mild.

If you want to follow my travels or enjoy animal/plant photographs you can find me on instagram: smilelynaomi