I noticed that trees were very scarce at this altitude, but low, bushy shrubs, notably the Alpine Heath, with innumerable spikes of pale creamy-yellow flowers, were plentiful.

– From Valley of the Flowers at Mt. Kosciuszko by Betty Askew, in The Sun December 1940.

As you are heading into the valley the soil is getting soggier and smaller, shrubbier species are replacing the Eucalypts and herb understory.

Epacris glacialis: You really only find Epacris glacialis or Reddish Bog Heath in heath communities at very wet sites. The genus name comes from Epi meaning upon, and acros meaning hilltop. The dude who named them thought the genus mostly lived on hilltops. They are in the heather family (Ericaceae) which we do associate with exposed areas, but they don’t necessarily only occur only there. Heading down the hill this is the dominant species in the heathland. 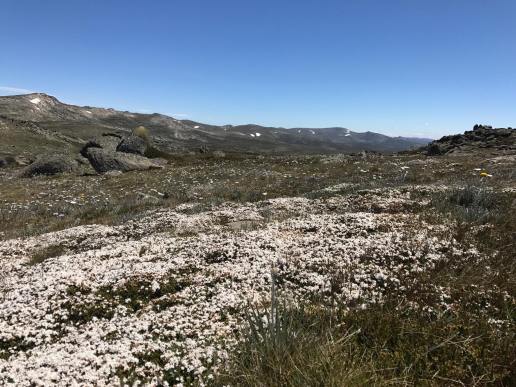 Ozothamnus alpinus: Translates roughly to smelly shrub, because many of the species have smelly leaves. Sometimes a nice smell, sometimes not so much. The flowers hang around on the shrub for a long time after they have finished their business of being pollinated and so they have the common name of Everlasting. This particular species is called Alpine Everlasting. When the flowers are young you can see the bracts that grow around the clump of small white flowers creating a pink-red bud.

Prostanthera cuneata: “It is a very handsome plant, the dark green foliage admirably setting off the profusion of large, pale lavender flowers”, wrote botanist J.H. Maiden in 1898. This dark green foliage smells minty-eucalyptus-y when crushed, giving it the name Alpine Mintbush. And the pale lavender flowers are loaded with nectar to attract insects to pollinate the species.

Acrothamnus montanus: Another species named after its tendency to grow in high places. Acron is greek for ‘summit or extremity’, while thamnos means shrub. So it’s a shrub that grows up high. Then Montanus is for mountains. Alpiny Mc Alpine Shrub. The little red berries provide food for animals including lizards, who in turn spread the seeds.

Baeckea gunniana: Charles Darwin named the genus after his best mate Dr Abraham Baeck (a doctor and naturalist). One of my dreams is to have someone to name a plant after me! The gunniana for a plant collector Ronald Gunn who collected the original specimen. The leaves smell of tea tree when crushed.

Pimelea ligustrina subsp. ciliata: The Tall Rice Flower or Pimelea ligustrina subsp. ciliata has bundles of cute white flowers which (as you can see in the pictures below) are surrounded by 8 bracts, reddish brown before the inflorescence fully opens. The species name Ligustrina is a reference to the unrelated genus Lingustrum which is meant to have similar looking leaf arrangement on the stem. Lingustrum: a name that causes any urban bushland enthusiast to shudder in distaste. 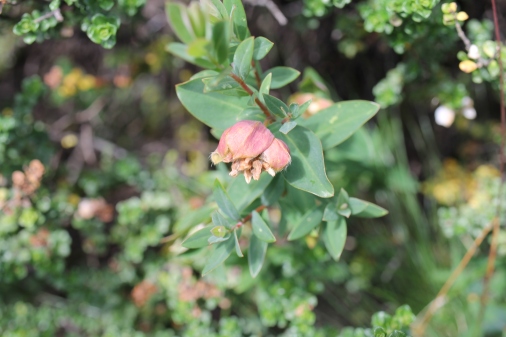 Wet Alpine Heath isn’t the most common type of heath in the Kosciuszko area. I’ll be writing a post about the more common heath community sometime soon. As you continue down the hill you start to see more grasses and herbs –> Tall Alpine Herbfield

A huuuugge thanks to Casey Gibson for taking me along on her fieldwork and teaching me about the plants of the alpine region. Check out her amazing instagram, twitter and read about her PhD here.

Maiden, J.H. (1898) A contribution towards a flora of Mount Kosciuszko. Department of Agriculture. Sydney.