Paracaleana minor or the Small Duck Orchid can be found on rocky slopes and gravelly soils in sclerophyll shrublands, woodlands, grasslands and forests across the Australian South East. 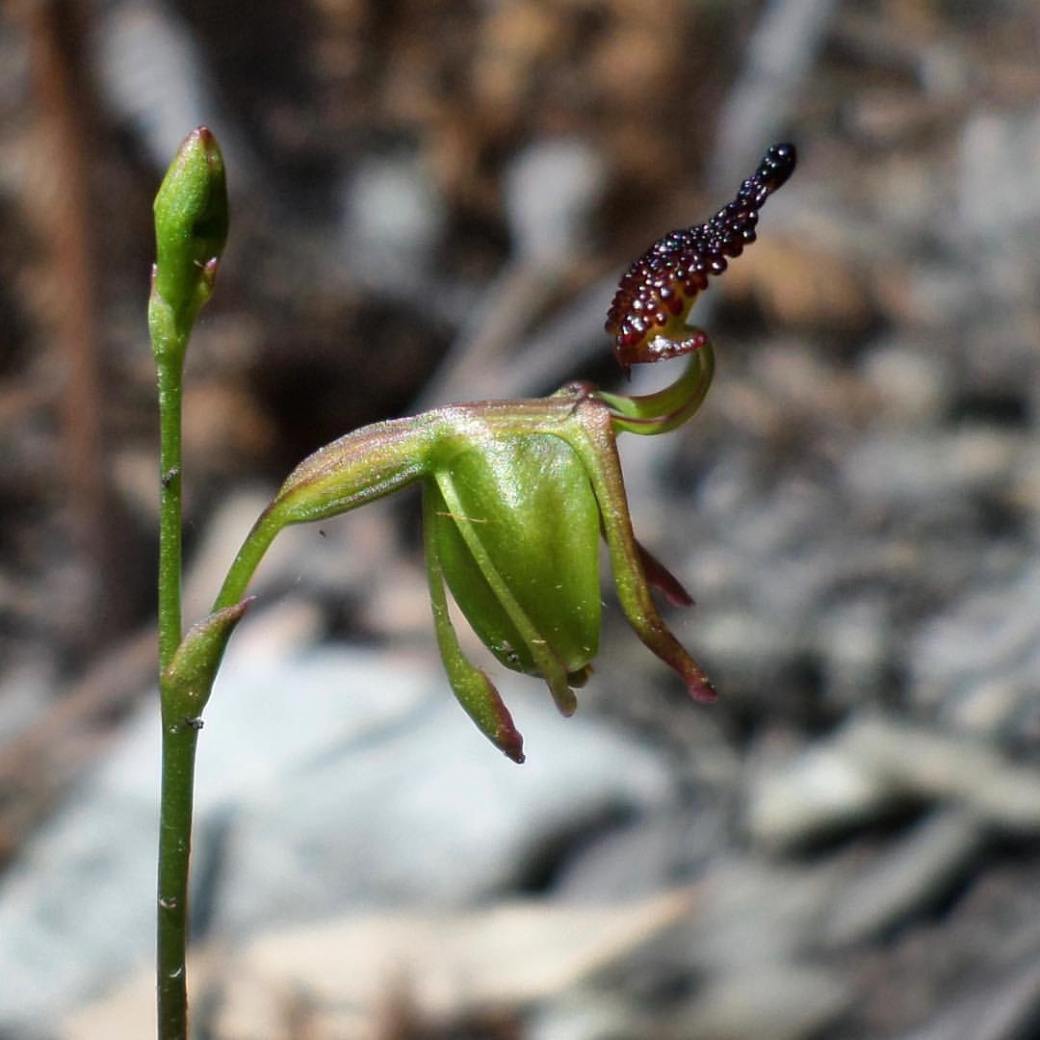 Sexual deception is what it sounds like. Some orchids have evolved to look and smell like a female insect and send out a silent “come hither” to the male insect who thinks he is about to get lucky. He tries to get it on with the flower, while the flower plops a sac of pollen (called pollinia) on the head of the foolish insect. He flies away and finds himself falling for the orchid’s trick again, and leaves the pollen sack behind on the second flower.

Calochilus campestris or Copper Bearded Orchid can be found in moist sclerophyll forest on the East Coast of Australia and in Tasmania. Their flowers are pollinated by the male scoliid wasp (genus Campsomeris). You can see that the labellum has evolved to resemble a wasp, with colourful hairs and even some glands that look like eyes.

These orchids are exploiting the mate-seeking behaviour of male insects, usually Hymenoptera, a large insect order that includes bees, ants and wasps. The orchids exude a chemical that smells like the mating pheromones of the female of the pollinating species. This cross-species communication is made possible because both insects and plants use the same chemical compounds in their cuticle wax layers to reduce water evaporation. Insects use these chemicals for communication, and some orchids have evolved the ability to co-opt the compounds in their own protective waxy coating for producing insect pheromone-like smells. In addition to this sneaky smelly trick, the bottom petal structures (labellum) will often mimic the shape, colour and texture of the female. The result is flowers that look super weird and often very beautiful.

Sexual deceit has evolved independently across the world in unrelated orchid genera. About 400 sexually deceptive species can be found in Australia, Europe (one genera, Ophrys), the Mediterranean basin, South Africa (2 species from the genus Disa), and in South and Central America. However, it is likely that there are species that are yet to be described.

Caleana major or the Flying Duck Orchid is pollinated by male sawflies (and will resprout from tubers as a backup). The sawfly lands on the labellum which spring shut and forces the sawfly against the column of the flower transferring pollen. They can be found across the East and South of Australia on sandy or gravelly soil in sclerophyll forest, shrubland and heathland.

Giant thanks to Casey Gibson and Justin Chan for letting me use their photos. Check out their Instagram: Casey and Justin

There are loads of wonderful resources out there on this topic, with examples from across the world. Below are a few.

Sexual deception in orchids by Alun Salt on the AoB Blog

Ellis, A. and Johnson, D. (2010) Floral mimicry enhances pollen export: the evolution of pollination by sexual deceit outside of the Orchidaceae. American  Naturalist. 176(5): 43-51.

Schiestl, F. and Cozzolino, S. (2008) Evolution of sexual mimicry in the orchid subtribe orchidinae: the role of preadaptations in the attraction of male bees as pollinators. BMC Evolutionary Biology, 8(27):1-10

Smithson, A, and Gigord, L. (2001) Are there fitness advantages in being a rewardless orchid? Reward supplementation experiments with Barlia robertiana. Biological Sciences 268 (1475): 1435-1441.